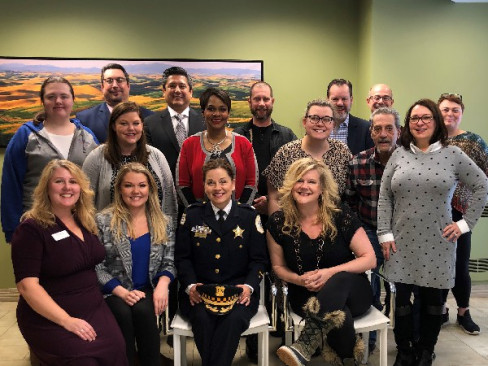 Norwood Park’s first settlers were, of course, Native Americans. Their trails are still in evidence as modern day streets Higgins Road, Milwaukee Avenue and Talcott Road. The first non Native American settler, Mark Noble, came to what was then Jefferson Township in 1833. He and subsequent farmers, including Henry Rincker, were attracted by the high, fertile prairie land. In fact, Union Ridge, one of the highest points in Cook County, runs through Norwood Park.

The Chicago and North Western Railway built tracks through the area in the 1850s, thus providing a relatively quick and convenient route to Chicago. In the mid 1860s, a group of Chicagoans, soon to be Norwood Parkers, formed the Norwood Land and Building Association, purchased several farms, subdivided them and platted a suburban village. The first post office was built in 1870 and the first store in 1871.

The Village, originally named Norwood for a New England town in a Henry Ward Beecher novel, was renamed Norwood Park when it was discovered that another Norwood had already been established in Illinois. Residents of the Village and its immediate area, generally displeased with services provided by Jefferson Township, established the Township of Norwood Park in 1873. The township was composed of portions of four other townships: Jefferson, Leyden, Maine and Niles. The Village of Norwood Park was incorporated in 1874. The Village was annexed to Chicago in 1893.

The Village of Norwood Park was designed to be a park like residential suburb with large lots, wide streets and elegant single family homes. One unusual feature is its curvilinear street pattern. A 1907 real estate sales brochure described Norwood Park as a place with “proper living conditions, fresh air and sunshine, good surroundings, a healthy religious activity,…[and], no saloons.” By the 1920s, Norwood Park was a mature residential community. As the community evolved, the early Victorian homes were joined by tudor, bungalow and ranch style homes. Downtown Norwood Park is centered at Northwest Highway and Raven Street near the recently restored C&NW (now Union Pacific R.R.) train station. Additional retail and commercial activities are located on Higgins Road, Harlem and Milwaukee Avenues.neighborhood home

Norwood Park remains a quaint, picturesque community and lives up to the dreams of those early settlers who considered it an “ideal suburb.” Since 1980, the Norwood Park Historical Society has been seeking landmark designation for a district and individual buildings in the community. The City of Chicago identified a large historic district in 1986. The Noble Seymour Crippen House at 5622-24 N. Newark Avenue was designated a City of Chicago Historical Landmark on May 11, 1988; the John Wingert House at 6231 N. Canfield was designated on July 31, 1990. The Noble-Seymour-Crippen House was listed on the National Register of Historic Places on August 11, 2000; the Norwood Park train station was also listed, in 2001.

It’s wonderful to know that the Norwood Chamber of Commerce is there watching out for our businesses. They watch out for our Facebook postings and promote them as well as special events happening. Thank you for being there for us.

Thank you for the continuing support we receive from the Norwood Park Chamber of Commerce. It helps us in so many ways. From the recent Fall Fest we raised over $450 from donations and the sale of cotton candy which was generously supplied for us by the Chamber. While we rely heavily on food donations, we also supplement our available items with purchases from the stocks of The Greater Chicago Food Depository. During the last quarter our costs for this food averaged 61 cents per pound. So with the amount raised at Fall Fest, we can purchase over 700 pounds of food for clients in need in the Norwood Park area. In addition, we received excellent community exposure at Fall Fest. This ranged from community education of our services, to contacting new volunteers, to meeting a teacher who plans to put her class to work for us. A very rewarding day. Last, thanks to your Board for our membership accommodation. It allows us to put more of our funds to work in the local community.

Since I’ve joined the Norwood Park Chamber, I’ve received 3x the amount back that I spent in dues, I receive ads on the newsletter, Bea has directed me to businesses that need my services.  Promotion of a neighborhood IS priority, and that’s her job, and she does it…Her advertising my business has helped me to gain two new clients in this month alone.